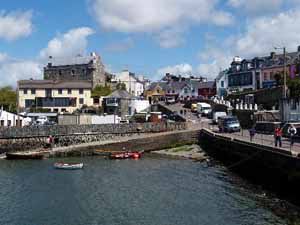 CORK County Council has applied to An Bord Pleanala to build a breakwater in Baltimore Harbour.

Fianna Fáil Cllr Joe Carroll, who previously served on the Baltimore and Skibbereen Harbour Board, which was disbanded in 2012, welcomed the news, saying a breakwater will have a significant impact on the commercial life of the village.

He said the breakwater would also make Baltimore a much safer harbour because, without it, boats have to go to Old Court, Union Hall and Castletownbere, to shelter in stormy weather.

The completion of the breakwater will see all the elements of a consultant’s report – that was commissioned by members of the community and published in 1987 – finalised.

At the time the report was drawn up, Cllr Carroll said: ‘Baltimore had one single road going through it, very little parking, poor pier infrastructure, and little or no facilities for the marine leisure industry.

Locals, together with harbour users, and the Baltimore and Skibbereen Harbour Board were successful in the final ten years of the life of the harbour board in finalising a lot of what was contained in that plan, according to Cllr Carroll, who paid tribute to Adam Cronin of Cronin Millar Consultants, who came on board in 2004, and ‘took us in the right direction.’

Lifeboat coxswain Kieran Cotter welcomed the announcement saying: ‘We have been campaigning for 30 years for this. In the winter time, the fishermen have a terrible time. Boats have been damaged, lives have been put at risk, and some of the boats are now too big to go up the river to go to Church Strand, by the lifeboat station, for mooring. They have to leave Baltimore in bad weather to go to Union Hall and Castletownbere, which is very dangerous.

‘Bad weather also has serious implications for the ferry industry. There are days when the ferry cannot travel because of the lack of proper shelter facilities and they have to take shelter in Old Court.

‘In the summer time,’ he added, ‘many leisure craft from both Ireland and all over the world visit Baltimore and in the event of a gale or a storm, it is a very unsafe place.

‘We have had two calls in the lifeboat this year to come to the assistance of yachts that got into difficulty in stormy weather so it is extremely important that this project gets the go ahead.’