Siobhan O'Callaghan is no stranger to awards

THE numbers speak for themselves: of the 7,000 people who voted in the Today FM competition to find the 'Best Brunch in Ireland' Kalbo's Caf in Skibbereen took 4,000 of the votes. 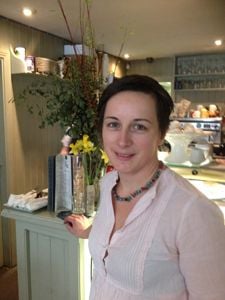 THE numbers speak for themselves: of the 7,000 people who voted in the Today FM competition to find the ‘Best Brunch in Ireland’ Kalbo’s Café in Skibbereen took 4,000 of the votes.

It is the second major award for the small but perfectly formed café at North Street, Skibbereen – two years ago it also won the Good Food Ireland ‘Café of the Year Award’.

What the judges in these competitions realised is what the people of Skibbereen have known all along – the food that Siobhan O’Callaghan serves at Kalbo’s is fantastic!

The best local produce is featured in every meal from the Macroom Oatmeal served with honey and cream to (a long-standing favourite) the warm Ardsallagh Goats Cheese Salad, and everything else in between. When a café is open six days a week – including late opening until 9pm on Fridays and Saturdays – and is busy all the time, you know it’s good, but this latest award especially honours the restaurant’s brilliant brunch.

Siobhán says that two of the most popular dishes on the menu include poached eggs with hollandaise sauce served on roasted tomatoes, mushrooms, Gubbeen ham and toast, as well as the café’s legendary breakfast butty.

This is filled with Gubbeen bacon, Tom Walsh’s homemade sausages and black pudding, and a fried egg.

You can actually see people queueing for this delicious butty – a weekend treat – every Saturday morning at the Farmers’ Market in Skibbereen.

‘We are blessed to have built up a loyal customer base since we first opened on March 1 1997 and, we are delighted too to have such a following at the market every week. In fact,’ Siobhan disclosed, ‘we are considering another business opportunity in Skibbereen,’ but she wouldn’t be drawn on the details.

Ask any of the regulars what makes Kalbo’s so popular and you’ll probably hear them say: ‘It’s Siobhan’s passion for good food and good flavour combinations. You can’t teach that: it is an innate talent and she has it in spades.’

Look at the menu and you’ll also see that all of the breads, the cakes, the soups, are all homemade. Even Anthony Boyle, Siobhan’s husband, runs Thornhill’s Organic Farm with Morgan Hurley and produces the finest salads for the restaurant.

‘We are very passionate about food,’ said Siobhan. ‘We are a bit obsessed. Even our holidays revolve around food. But none of what we have achieved would have been possible without our loyal staff, especially Denise and Pamela, who have been with us for more than 16 years.’