Ava Archbold from Clonakilty donated the last €100 of her confirmation money to help Rufus who needed an operation on his badly-infected ears. 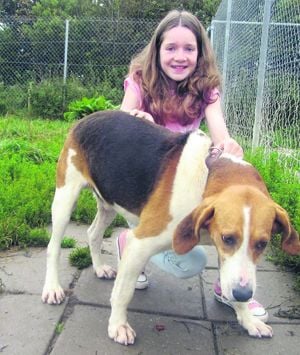 Ava Archbold from Clonakilty donated the last €100 of her confirmation money to help Rufus who needed an operation on his badly-infected ears.

WHEN Ava Archbold, (11), a sixth class pupil at St Joseph’s National School in Clonakilty, heard about the plight of ‘Rufus’ the hound, she didn’t hesitate to give her last €100 from her Confirmation money towards a much-needed ear operation for him.

Rufus was found abandoned on a beach in West Cork last week and had badly infected ears.

He was taken to the West Cork Animal Welfare’s rescue centre in Owenahincha, after vets from Pat Coffey’s Veterinary Centre examined him.

‘Ava has been putting money aside for ages and has wanted to come out to their centre to see the dogs,’ said Deirdre Archbold, Ava’s mother.

‘When she spotted the post about Rufus on Facebook, she said they had to go see him.’

‘She got to meet all the other dogs and puppies there and she even said she would like to volunteer there at some stage. She’s already talking about doing her work experience there when she’s in Transition Year and she’s only in sixth class now.’

Over €300 was raised by donations from people across West Cork for Rufus’s operation on Wednesday which saw vet Marta cut away excess inflamed skin in his ear canals which had been left untreated for a long time.

‘There is some desperate cruelty happening to animals, so this was great to hear good news for a change. We’re all animal lovers and both Ava’s father Ronan and myself are so proud of her – it was such a selfless act,’ said Deirdre, a well-known singer based in Clonakilty.

‘Ava was just delighted to have met Rufus, who is a beautiful dog, and I hope he gets a good home after his operation.’

West Cork Animal Welfare Group said they were delighted with their appeal for Rufus.

‘We are totally overwhelmed with Ava’s donation of €100 towards Rufus’s operation, as it was so generous and kind,’ said Tory Joyce at the Centre.

‘We also want to thank everyone who donated, along with Ava. Such great kindness is very much appreciated and we were delighted to see Ava at the rescue centre.

‘She is welcome anytime,’ she added.

If you would like to donate to the group, you can text 50300 to WCA and donate €2. See also www.westcorkanimals.com for more information.