Taoiseach Micheál Martin and Sen TIm Lombard met with Eileen and Louise O’Donovan of the Eldon Hotel, Skibbereen after the floods

One month after the devastating floods in Skibbereen, Bantry, Rosscarbery, and other areas, Jackie Keogh hears how many local companies have opted to take the financial hit rather than push their insurance premiums up with a claim 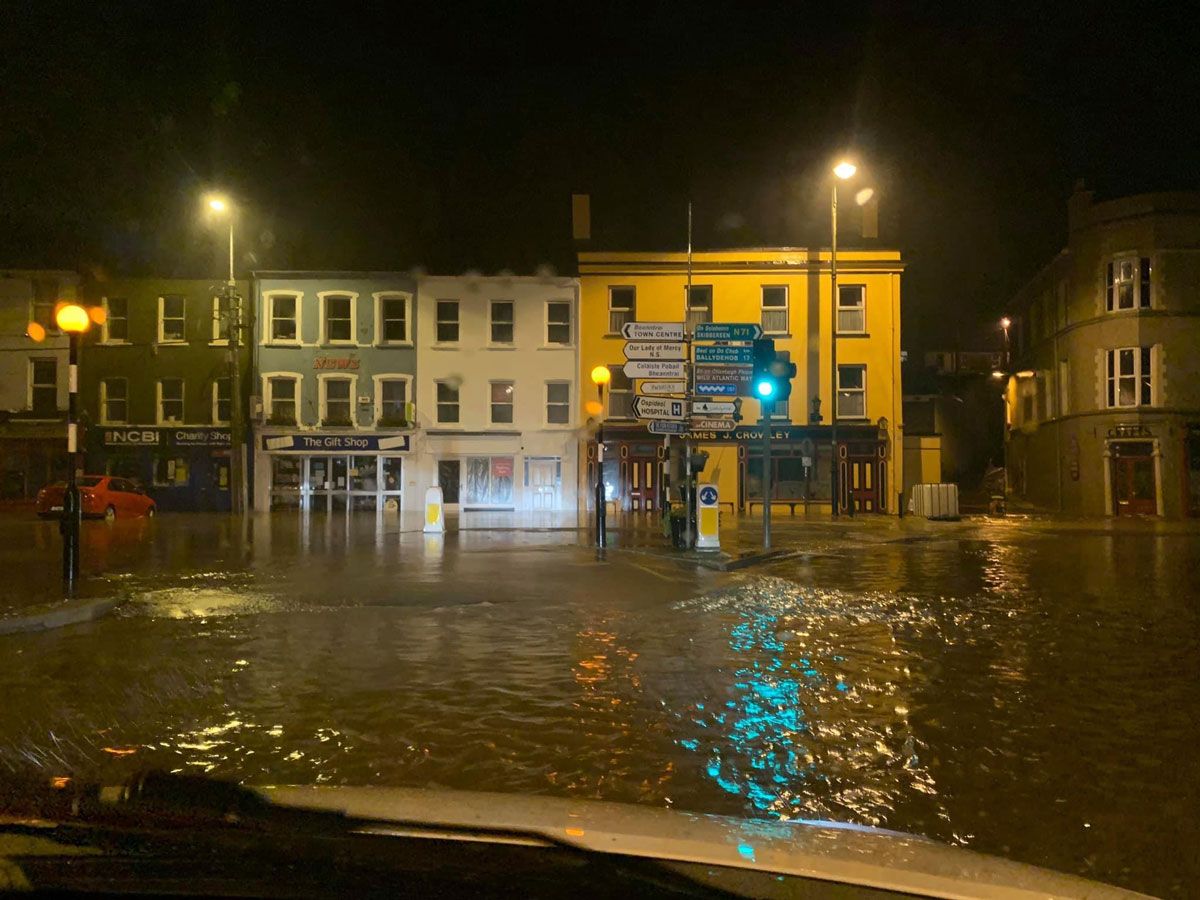 The flooding in Bantry

MOST businesses in Bantry have returned to normal since last month’s heavy flooding, but there are exceptions, and, for some, it has been a ‘double whammy’ of Covid, followed by the deluge.

Terence Gibbs, who has leased the Cosy Cabin pub at Barrack Street for the last six years, says the September 21st deadline for the re-opening of wet pubs has come and passed him by, and that it will be Christmas before he is likely to reopen, following the devastation caused by the flooding.

Chairman of Bantry Business Association Diarmaid Murphy said it is difficult to say how hard some of the 50, or more, businesses have been hit, financially or otherwise, as a result of the flooding.

Considering there are 200 businesses trading in Bantry, Diarmaid said the flood affected a quarter of the town’s commercial centre.

He said a lot of businesses are taking the financial hit on the chin, having decided that to claim on their insurance isn’t worth the hike in their premium next year.

‘We are glad that the Council and the OPW have a plan in place, and we in the  association will be working to keep that on schedule.’

The one silver lining, according to Diarmaid, is that the flooding has ‘clarified’ what needs to be done.

‘Bantry needs a €6.7m flood scheme and the government can be under no illusion that it is urgent. We do not want a repeat of the August flood, an event that wreaked havoc on our town.

‘Our businesses are back on track, they are up and running, but they have been dealt a body blow.’

IT is one month since Bridge Street in Skibbereen was flooded, but local business people and residents are still waiting for a meeting with Cork County Council to discuss liability.

Cllr Joe Carroll (FF) told Council officials recently that those affected are not claiming on their insurance because they believe the Council should be held accountable for the damage caused by the flooding to their properties.

He said the Eldon Hotel was flooded in 2016, just before it reopened under new ownership, and it was flooded again in November 2018, under exactly the same circumstances.

In 2018, he said these people were given assurances that the problem caused by run-off from a hill at The Cutting in Rossa Road would be resolved.

He said a grate to cover the culvert at The Cutting wasn’t installed until the day after the flood, and he expressed reservations about the newly engineered system working in the future.

‘I think that no matter what kind of pipe they put in the culvert it won’t be a solution because the pipes will get blocked again with soil and debris,’ he said, adding the Council will have to ‘find another solution to that waterfall than the culvert that is supposed to take it.’

He recently attended a socially-distanced meeting at the rear of Bridge St, with about 16 locals, and West Cork’s three TDs.

The people there were ‘angry’ he said, and some indicated they wouldn’t claim on their insurance because they believe the Council has a duty to fix the problem.

Cllr Carroll told The Southern Star: ‘It is important to point out that the town’s flood defence scheme proved to be a great success in August, but the problem with The Cutting, which is the Council’s responsibility, needs to be rectified.’

Divisional county manager Clodagh Henehan said at a recent local authority meeting that the Council would not be meeting with Bridge St business people to discuss liability, but they could discuss what happened. She said the primary issue was ‘the level of rain that fell from the sky’. But Cllr Carroll interjected, saying: ‘That water fell in lots of places.’ Ms Henehan said a meeting would be arranged. 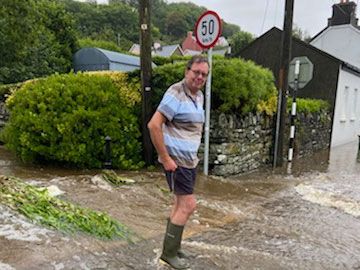 IT’S business as usual in Rosscarbery, one month after the picturesque coastal village was hit – twice – by floods.

Celtic Ross Hotel manager Neil Grant confirmed that there was ‘a slight dip’ in trade in the area in the days and weeks after the flooding, but things are improving. ‘We are happy with the business levels we have, and occupancy at the hotel is better than expected,’ he said. There are, however, defects that still need to be addressed. The hotel manager said the popular cliff walk from the Warren is out of bounds, with no sign of any work taking place there to get it reopened.

Locals have welcomed the completion of the road works at Roury Hill this week, between Rosscarbery and Glandore, describing the finished road surface as ‘a super job.’

DUNMANWAY was also badly hit by flooding at the time, with a number of residential homes affected including Castle Street and Woodbrook.

The residents met with junior minister Patrick O’Donovan and discussed their ongoing concerns.

Just three days before Dunmanway was hit by floods concerned residents of Chapel Street had, ironically, met with two OPW officials to discuss flood defences by Chapel Lake. Councillors say they are keeping the pressure up with the local authority regarding flooding at the lake.

In Bandon, there was flooding at the Bridge St and Brady’s Lane areas on Monday 24th into Tuesday 25th August, with the sewer network overwhelmed by rainfall volumes. But the Council has pointed out that there are two major projects still underway in the town.

They are the OPW Flood Scheme, which is at an advanced stage and performed well during the flood event, and the Irish Water Main Drainage Scheme.