A FIRST drive last week in the new Citroen C4 gave me an indication of where this French brand is heading. A further indication, really, because they have been flagging it for some time. The direction is: comfort.

It’s the third generation of the C4, revealed last year, but only brought to Ireland this month. Those familiar with the previous versions will probably be quite impressed with the level of improvement in materials and fittings. They’ll probably like the new style, too. The company says the model is still a hatchback, but with crossover characteristics. That translates into a coupé rear, a higher car and one also with a higher ground clearance. But it doesn’t look top-heavy.

The stylists have evolved the front design with a quite quirky look — which is okay, it’s a Citroen after all, where quirky is an underpinning ethos. And it is a strong front. The profile gets an interesting kick under the rearmost C-pillar which, in tandem with the bottom-door airbumps, provides a lean and mean look. In all, it’s a distinctive car.

Inside, those better materials and fittings I mentioned create a much stronger sense of quality car than in the previous C4. Even in the entry ‘Feel’ grade which I drove, there’s nothing to indicate this is a loss leader. Indeed, the Irish distributors — and Citroen is now back here in the very capable hands of the Gowan Group — make the point that their cheapest C4 is specified to be a proper seller, rather than holding an entry price point.

There’s a substantial centre screen nicely integrated into some shiny framing that includes the ventilation opes. A proper radio volume control, and a range of buttons and knobs to operate various functions, especially climate, are a good response to my long-time complaints about over-use of touchscreen. 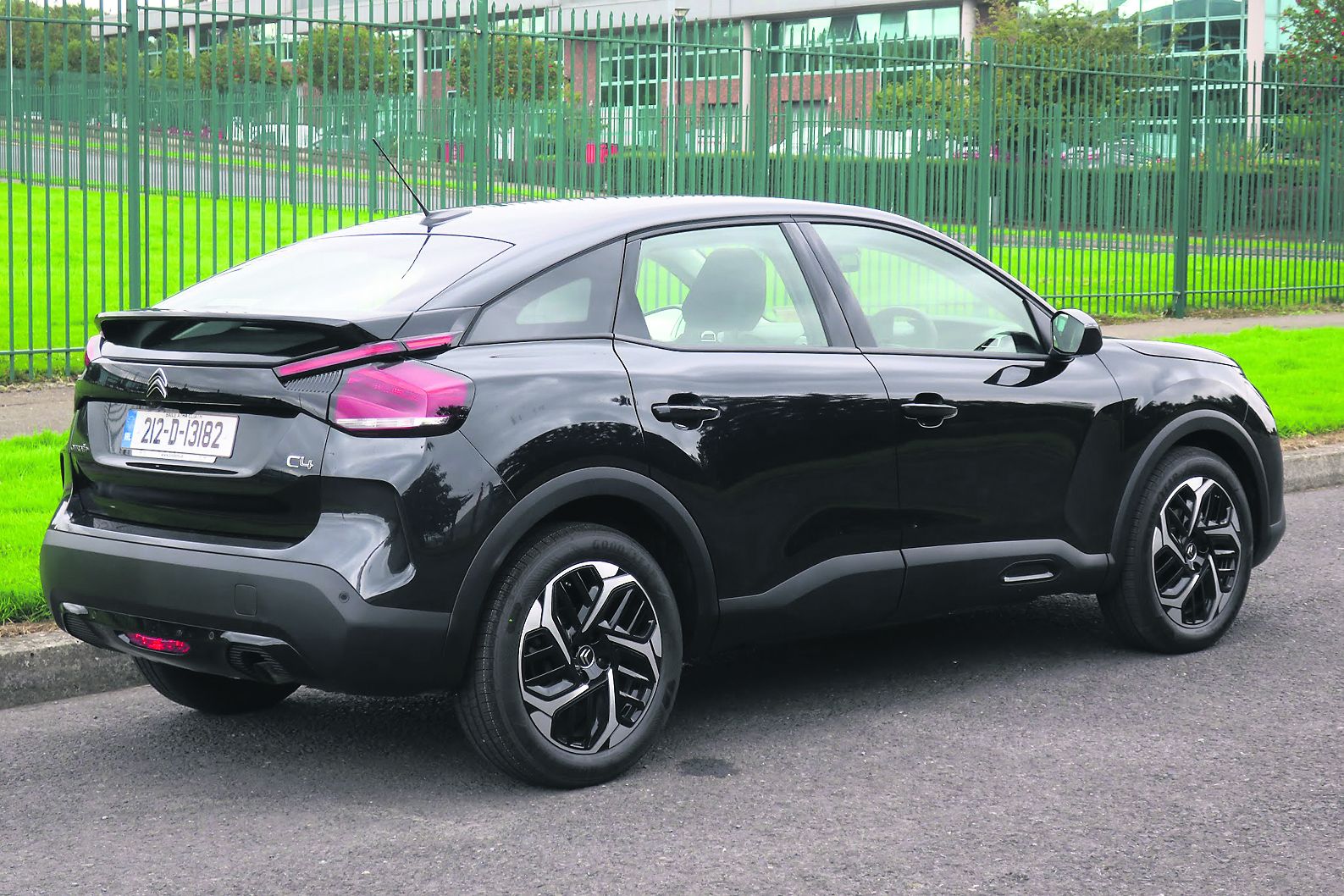 I don’t take all the credit for the designers seeing the light at last, but I was part of a general feeling about this amongst many colleagues in the automotive writing space. The driver’s instrumentation is also to Citroen’s credit, with a clean and simple digital readout of speed and other functions, without cluttering the area. The squared top and bottom of the steering wheel is attractive, though I’m still old-fashioned enough to prefer a round wheel.

The seats, even in this version, are a key part of what Citroen is basing its future on ¬– comfort. They look good, they feel good. Given that this was a shortish first drive, I have a niggling concern about the head restraints not having a forward-back adjustment, which I know would be an issue for some people. But I’ll look further into that when I have the car for an extended period.

The new car has a long wheelbase, and as a result Citroen claims a ‘best in class’ here with knee-room in the rear. The height of the car as a hatchback also makes it the tallest. With that and the high ground clearance, there’s also good eye-line visibility for the segment. Certainly, when I sat into the back, I had ample space, which sometimes doesn’t happen for me. The 380L boot space is decent.

The new C4, like its cousins in the Peugeot and DS brands, comes with the availability of three powertrain types — petrol diesel, and full electric. The petrols are 100hp/130hp/155hp, the diesels 110hp/130hp, while the electric outputs 136hp equivalent. There are two transmissions, the excellent 6-speed manual and the equally good 8-speed automatic. On this point, they’re dropped the previous 5-speed option and that’s a good thing. 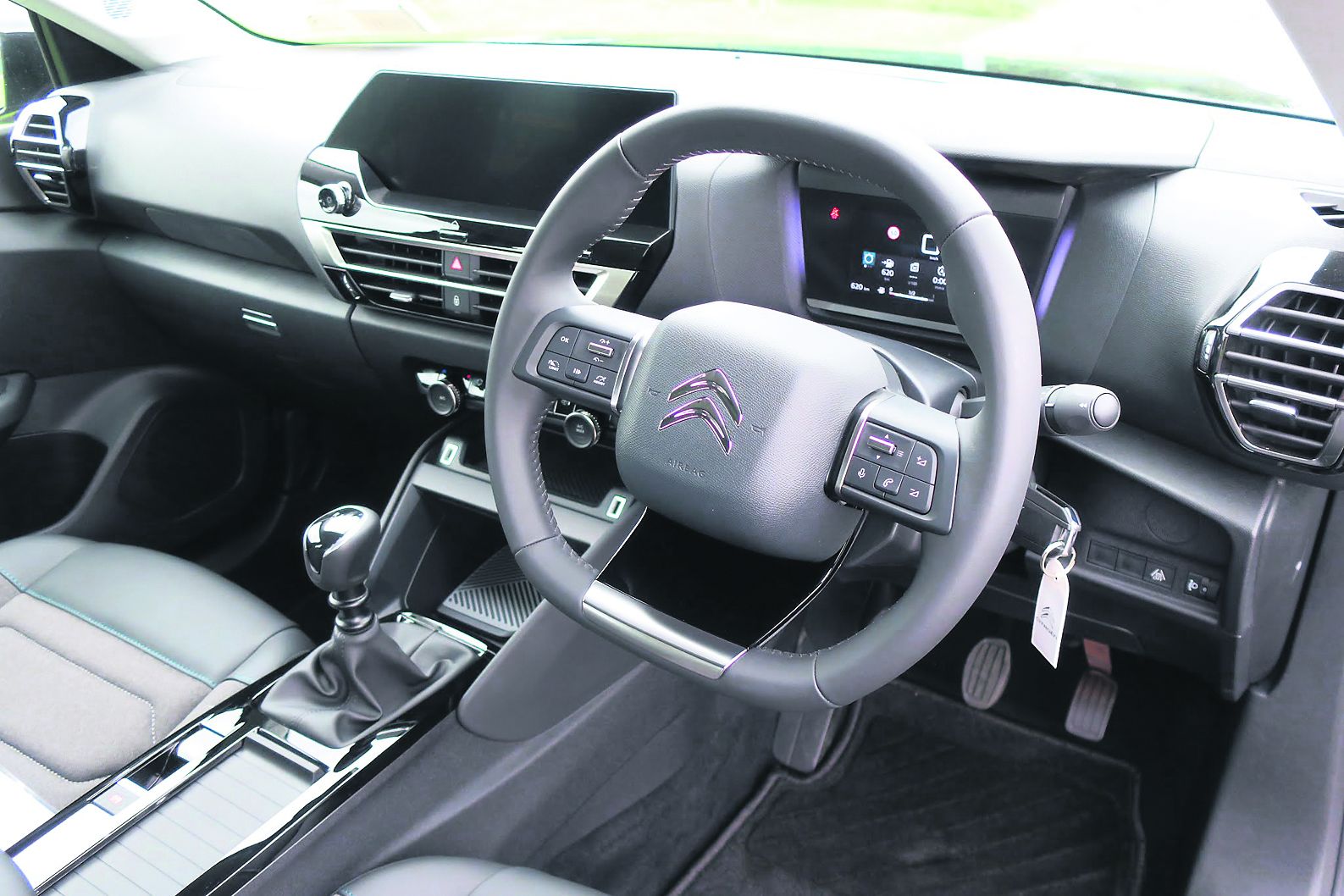 On this introduction I drove the 100hp petrol and the electric. My expectation was that I’d feel my petrol choice would be a little underpowered, but over the couple of hours I used it, that didn’t prove to be the case.

Still, I expect the 130hp will be a really good drive. The electric variant has the same drivetrain that my recent Peugeot e-2008 uses, but in the C4 gets a little longer range to 350km, partly attributed to the more streamlined shape of the new Citroen.

On the road both cars showed off the comfort that is now the brand’s primary selling point, in part from a proprietary suspension with hydraulic cushioning (no, NOT that quirky suspension of years ago, just a development of traditional shocks absorption). This will work well for anyone doing long distances in their C4, getting them to destinations significantly fresher. It works.

In due course I’ll be doing a deeper dive into this newest Citroen, but from my first drive I’m already expecting that the new distributors have something which will give them a good start to achieving the sales growth they’re seeking.