WHEN someone sees a review car you’re driving, and asks for more detail on it, and then goes straight to the local dealer to see what delivery times are like, the brand has done something right.

This was the case with the Skoda Enyaq that’s my subject for discussion this week. It may well be that I’ve made a sale for the dealer.

It was going to be spotted fairly quickly, not least because of the very lifestyle petrol-green colour. It wouldn’t be everyone’s taste, but I liked it.

The shape was going to attract attention too. Although a very close cousin to Skoda’s parent VW’s ID 4, the metalwork and the trimmings are much more distinctive. It’s a handsome beast. And even though I’m still getting my aesthetic head around front grilles that aren’t functional, because there’s no internal combustion engine to cool, that on the Enyaq provides good brand recognition. 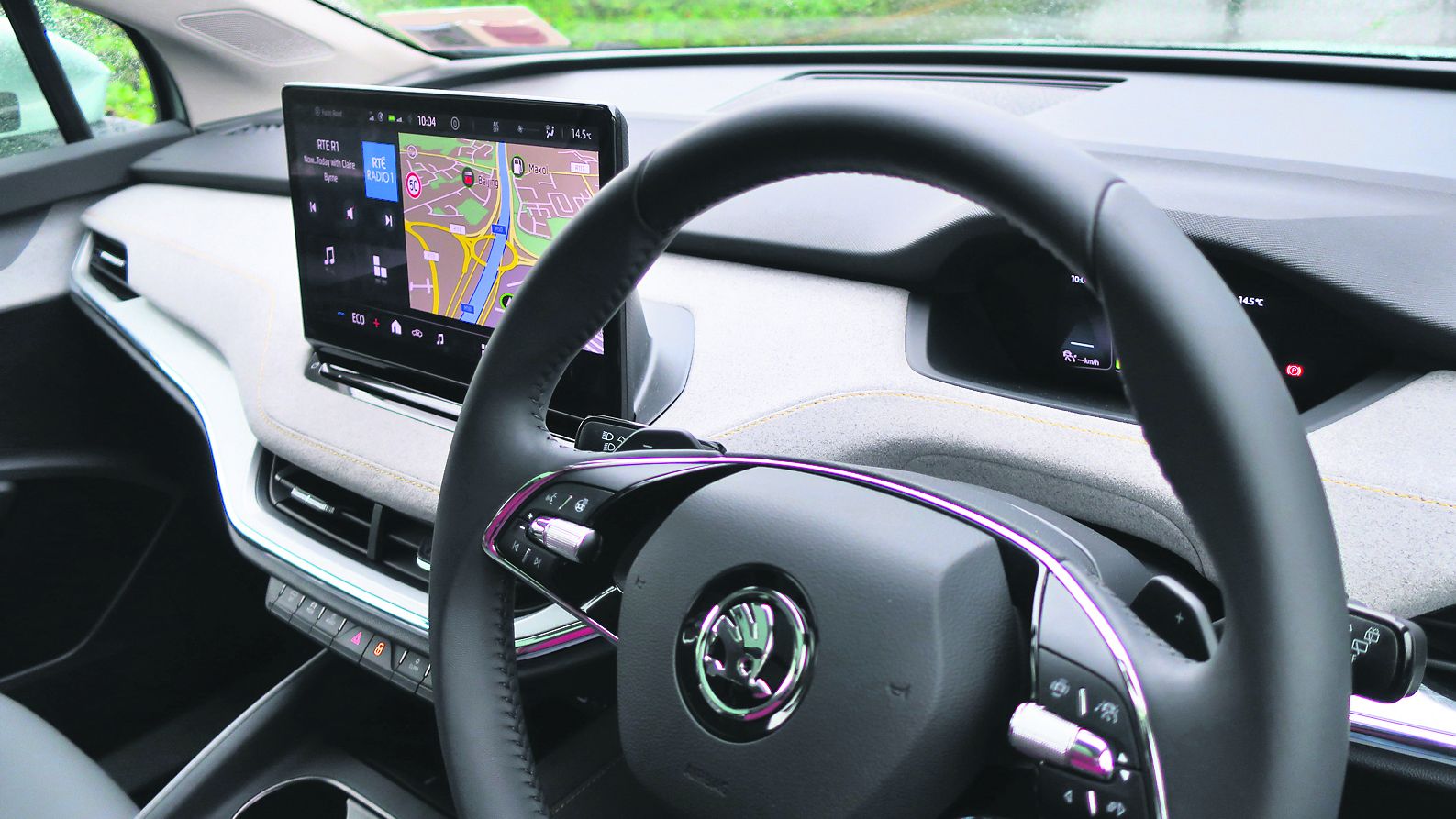 Oh, yes, I didn’t mention that the Enyaq is electric? Well, you probably know anyhow. And it is an indicator of how quickly we’re getting used to having EVs around. Of the last 40 or so cars I have driven for review, more than a dozen have been electrics.

The Enyaq is a big car, albeit a 5-seater. The size was one reason for my inquisitor’s interest, as she has teenage children. And the electric’s no-emissions ethos was another, possibly also thinking of the world which the children will inherit.

My own grand-daughter, recently attained teen status, was especially impressed with the interior. ‘Cool’ is apparently still an accepted epithet in her circle, and it was well used as she was with me when I collected the Enyaq. She explored the screens and the spaces and the finish on the trimming as we drove home, and clearly liked what she found. She asked questions too, and if our trade still exists when she grows up, she has the makings of a motor journalist. As her slightly older sister is already taking flying lessons, it looks like the transport fascination has remained in the genes.

The centre infotainment screen is a whopper. Reasonably easy to navigate, though I don’t like the ‘swipe’ style of the volume control that runs along its base. Still, that’s a passenger matter — I as driver had my own volume and station changer on the steering wheel. The climate controls are mainly screen management, unfortunately. The driver’s information is relatively sparse, in a much smaller space. There’s a tidy heads-up display.

I’ve gotten used to the quiet of electric cars, but it seemed the Enyaq was even more so than others. It really is a case of swishing along. There’s plenty of available oomph, but it’s the nature of large smooth cars that you tend to drive them smoothly, and anyhow there’s no downshifting revs-adrenalised rush to be had. Suffice to say that it accelerated well. 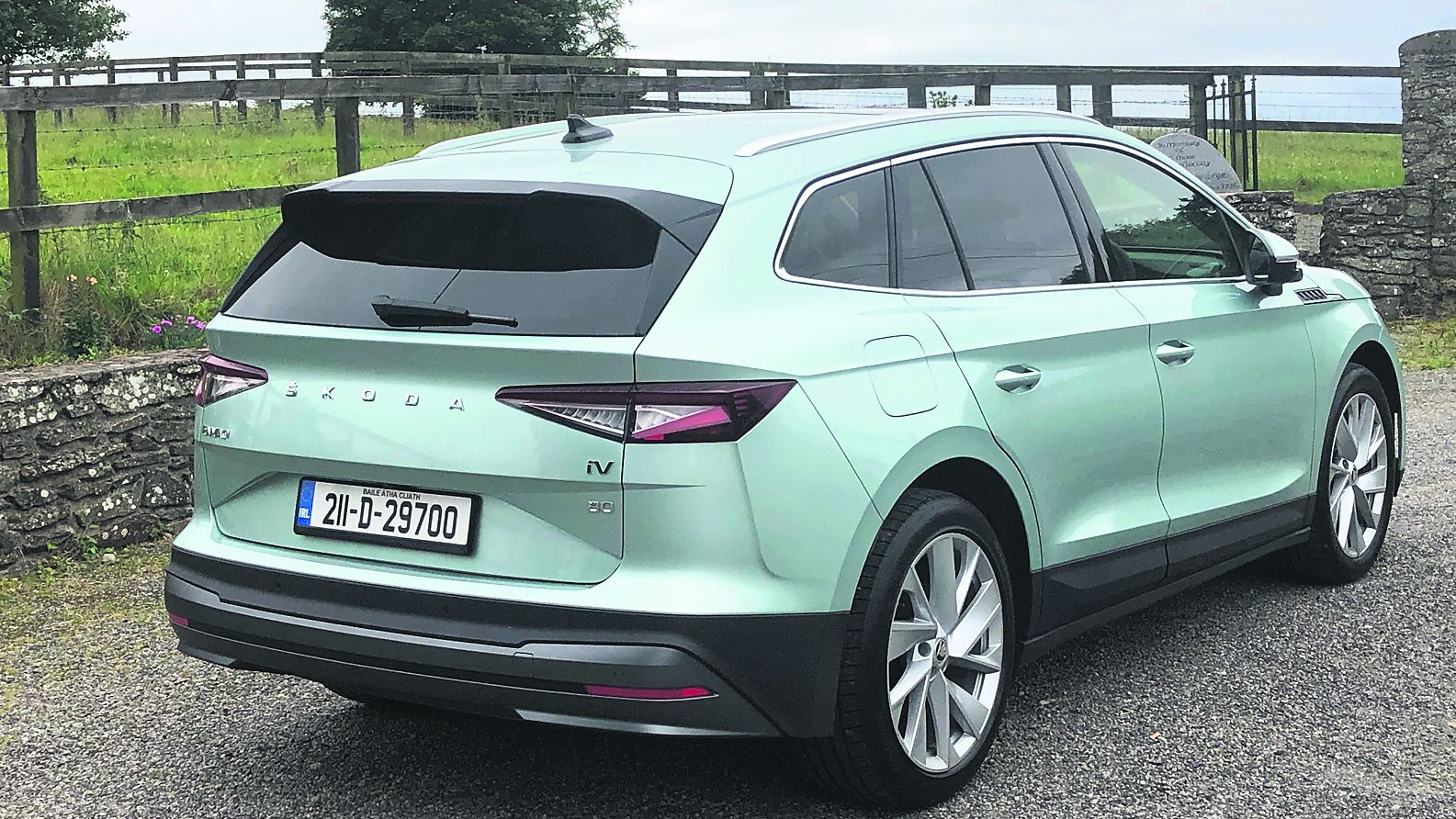 There are two versions of Enyaq available, and a range of option packs by which you can upgrade to choice. The car is designated 60 or 80, the main difference being the batteries, which offer 412km or 535km of range. The standard maximum charging rate is 50kW, but you can specify a 125kW option when ordering which will effectively halve charging time at a suitable supercharger station. I’m not going to bore with figures, but I found the 50kW of my review car plenty adequate at my local Circle K … whose charging machines are only 50kW anyhow.

The 80 version also gives you a reversing camera and ‘bird-eye’ parking aid, which I’d kind of want, as it is a big car. At Enyaq’s opening price I’d have expected it on the 60, but I suppose they have to differentiate in a few ways.

It goes almost without mentioning that the drive and ride were superbly comfortable. The weight of the battery under the floor in an electric car does offer a low centre of gravity, but none of them give you the sporty feeling that you can throw them around the place. I guess that’s going to be reserved to race tracks where petrol-engined cars will, in a relatively near future, be confined to.

But that’s a story for another time. For today, Enyaq is the latest in a line of EVs that are bringing us all into what our ordinary motorist tomorrow will be.