A new book marks the half century of a much-loved community organisation which, since its foundation, has empowered people not to simply exist, but in fact to flourish

IT was the Blitz that gave birth to Meals on Wheels – a concept that each country, each town, has made their own.

When Meals on Wheels started in Skibbereen in 1970, 15 hot, nutritious meals were delivered to people who could not cook for themselves.

Over the last 50 years, the community response has grown to the point where today – still in the grips of a pandemic – hot, healthy meals are being served to 480 people every week.

Along the way there was a name change and the Skibbereen Geriatric Society became a driving force in the community in identifying and meeting the needs of its elderly citizens.

The history of this multi-award winning organisation is outlined in a new book, which will be launched at its base of operations at Cara House at Market Street, Skibbereen, on October 8th .

The society chairperson, Linda Shannon, has written a forward to the book outlining how it expanded its services to provide sheltered accommodation, as well as a rather excellent Luncheon Club.

‘The driving vision of the organisation has always been to enable older adults to thrive in their own community,’ she said.

Anne O’Mahony, a long-serving member of Skibbereen Geriatric Society, takes up the story, explaining how it was initially convened under the auspices of the local Conference of the Society of St Vincent de Paul.

‘They had become aware, through their work in the community, that there were elderly people in the town who, due to infirmity or being housebound, were unable to cook a warm meal for themselves,’ she said.

‘Meals on Wheels originated in London during the Blitz, when many people lost their homes and were unable to cook their own food,’ she added.

‘The idea was further developed in the US, Canada and Australia, but it was still in its infancy in Ireland,’ said Anne, who recalled how the first 15 meals were prepared, free of charge, by The West Cork Hotel, St Anne’s Hospital and the Convent of Mercy.

It was, however, only after the society developed its own kitchen in the CYMS Hall on Market Street in 1977, and employed a chef, that it really took off.

In 1985 a bigger, better kitchen was constructed on the site of the former Boy’s National School and it continues to operate from there to the present day.

Not content to rest on its laurels, the society realised there was a need for sheltered accommodation for the elderly.

‘The principle underpinning this project,’ said Anne, ‘was that the elderly should be able to live out their lives in their own community and avoid being institutionalised.’

In 1973 they began a building project to provide seven flats on a site at Convent Hill.

Door-to-door collections provided the money needed to build the flats and the official opening by President Erskine Childers in October 1974 was a very proud occasion for the entire town. 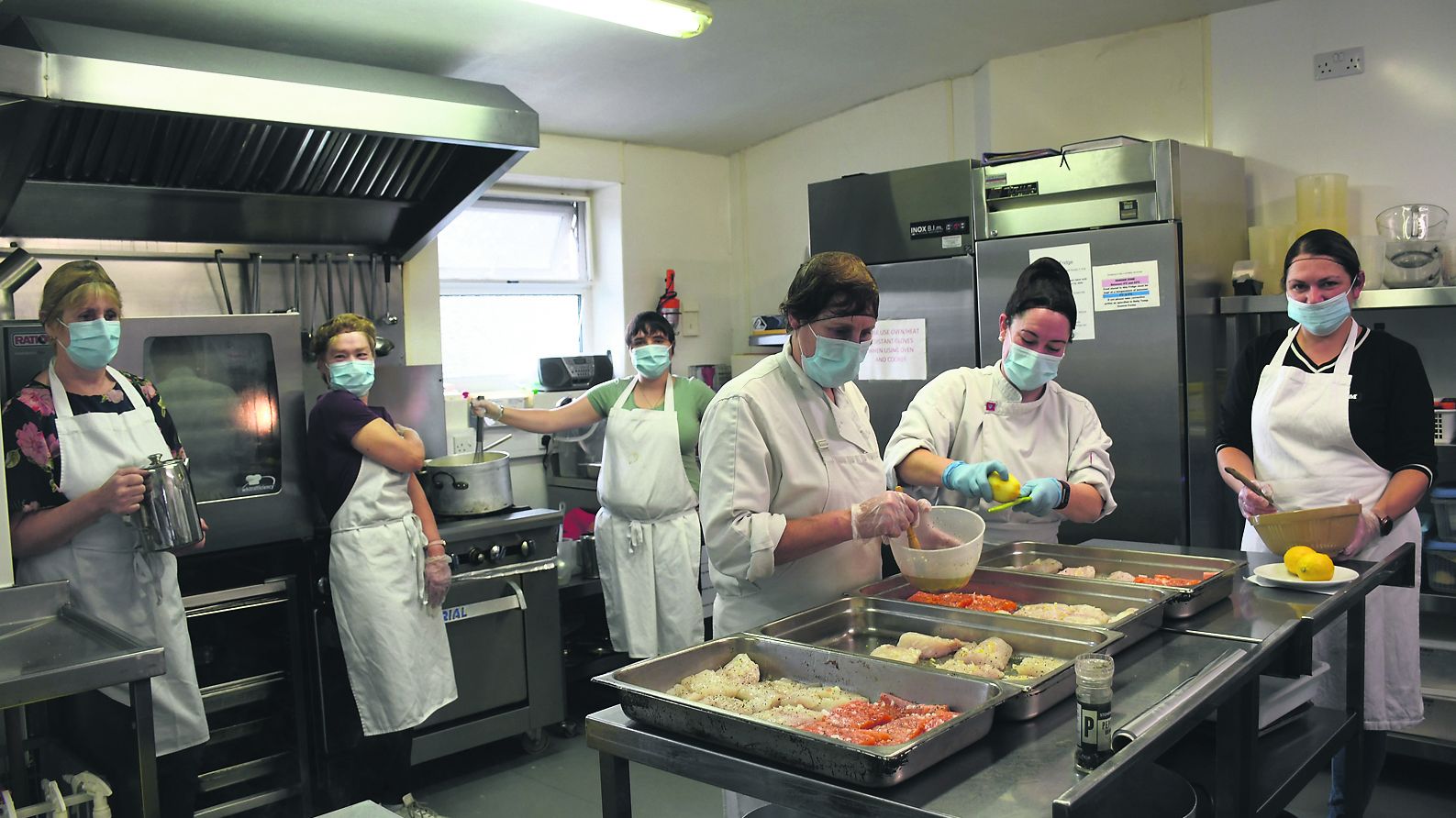 Six more flats were provided at Upper Bridge Street in 1981 and in 1985 the society leased the former Boys’ National School at Market Street and the first incarnation of Cara House came into being.

The building continues to be the focal point of the society because it houses its offices, its Meals on Wheels kitchen, and nine flats.

In 1998 a house at Mardyke Street was purchased, refurbished, and a further six flats were constructed in the adjoining garden.

As time went on, newer flats were built to a higher standard while work continued to upgrade the older units.

When President Mary Robinson officially opened Cara House on July 8th 1994 she said, ‘I have not just come to open Cara House. I have come here to value work that has gone on since 1970, 24 years of dedication and commitment.’

In time, more accommodation was added, however, in 2013 the society decided to close the supported care unit because as wonderful and all as it was it was no longer considered suitable given more modern rules, regulations and requirements.

Anne said it was with ‘heavy hearts and much sadness’ that the society closed the doors of Cara House Residential Centre on June 28th 2013.

But then a surprising thing happened, a total revamp of the interior gave the organisation a spacious, modern facility that has capacity for 50 people to attend its new Luncheon Club.

This is the domain of its service manager, Áine Minihane, the chefs, the staff, and the volunteers who make it such a pleasurable place to visit.

When the Luncheon Club opened its doors on November 5th 2013, Áine said they would have been content to have improved the life, and lifestyle, of even one older adult but 20 turned up.

That was an early indication of how popular the Luncheon Club was to become. Of course, Covid-19 has caused it to be closed, temporarily, but everyone is looking forward to the day it can reopen under HSE guidelines.

In creating a Luncheon Club, Áine said, ‘Skibbereen Geriatric Society was to the fore in assessing a further need, and it empowered individuals not to just exist in the community but to flourish and be an active part of their community.’

The temporary closure has caused them to diversify. Meals on Wheels is now a six-day service and the team – countless volunteers included – have formed a small army willing to do grocery deliveries and provide phone support services for their members.

The new book – which also captures the last five decades in photographs – outlines the many awards that have been bestowed on Skibbereen Geriatric Society.

These awards acknowledge its willingness to embrace change, anticipate the needs of its members, and to do it all to a very high standard and a genuine sense of care.