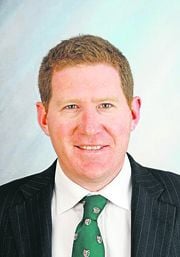 A MAJOR talk on the sinking of the Lusitania will be held in Skibbereen in July, as a fundraiser for the Friends of Bantry Hospital.

The talk will be given by Goleen lawyer, Michael T Kingston, who is now based in London. Michael is the Lloyd’s List Global Maritime Lawyer of the Year and an international expert on marine law.

‘The 100th Anniversary of the Sinking of the Lusitania and Safety of Life at Sea’ will take place on Tuesday July 28th at 8pm.

As a result of working closely with Lloyd’s of London, Michael T, and Lloyd’s Irish representative, Eamonn Egan, will be bringing a copy of Lloyd’s Loss Book – the insurance bible – which records the loss of the Lusitania.

‘It is a very delicate and famous book and is usually displayed by the Lutine Bell at Lloyd’s,’ Michael T told The Southern Star.

Michael T is also bringing a copy of a special edition book The future of shipping since 1734. It was released by Lloyd’s List on the occasion of the historical paper going digital, on December 20th 2013. This edition, which is not publically available, will be raffled on the night and has been signed by Lloyd’s Head of Agencies, Lloyd’s Ireland, their head of Energy & Marine, and by Michael himself.

The lecture, which takes place in the West Cork Hotel at 8pm, will be a fundraiser for the Friends of Bantry Hospital, where Michael is a director, and a former chairman. Tickets are €10 each.

Michael T works as a solicitor in England, Wales and the Republic of Ireland and was awarded the Maritime Lawyer of the Year award for his contribution to safety of life at sea, particularly in the Polar regions in relation to risk and regulation.

Michael T was brought up in Crookhaven harbour and his family’s land at Brow Head, which protects the harbour, was one of the last landmarks that the Lusitania saw before she sank.

Brow Head was also the location of the British Brow Head Signal Station when the Luisitania passed in May 1915, Marconi having commercialised land to ship communication there only a few years earlier. Communication between the captain of the Luisitania and the British Admiralty has been a key element of controversy in the aftermath of its sinking.

Michael T originally gave the talk on the 100th anniversary of the sinking, in the Irish Cultural Centre in London, in conjunction with St Mary’s University, as part of their ‘centennial events in Irish history lecture series’.

“The Lusitania is a fascinating topic and was a huge Irish tragedy at the time, sitting in the midst of our long maritime history in Ireland and in my native Cork, where, sadly, we have had to endure terrible maritime accidents both under British rule and under our independent Irish Government, both Governments guilty of a clear lack of respect for the dead in acquiescing in cover-ups, and trying to brush the truth under the carpet of history,’ he said.

Michael T is a member of the Mayor of London’s St Patrick’s Irish Advisory Forum, representing the GAA and London Irish, and of the GAA All Britain Championship Committee.

He also supports the business community of both countries though the important trade associations such as the British-Irish Chamber of Commerce, the London Irish Construction Network, The British Irish Trade Association, the IDA and Enterprise Ireland.

‘Bantry Hospital is close to my heart and it is an honour to be able to contribute in some small way to its well-being because of the important work it does in conjunction with the Friends, in serving the people of West Cork and South Kerry, something that we must all contribute to.’