Jacqueline describes herself as an industry ‘disrupter’ who does things differently, mainly because she’s female.

Jacqueline O’Donovan took over her family’s UK waste business when she was just 19, after the death of her dad. Three decades later, she’s turned it into a multi-million pound success story

WHEN Jacqueline O’Donovan arrives in Goleen from London on as many Friday nights as her schedule allows, she feels like a big pair of arms are being wrapped around her.

‘It’s where I feel at home,’ says the MD of multi-award winning, family-run O’Donovan Waste.

‘I feel so safe and secure and relaxed when I get to my house. It’s the only place I can recharge my batteries and get my thoughts together and be myself,’ she says.

Jacqueline (54) has been heading up O’Donovan Waste since she was 19.

She was thrust into the role after the sudden death of her beloved dad Joe, originally from Goleen, at the age of 51.

She had no formal business training and had left school when she was 16 with just basic qualifications, so it was a big step up.

But considering the company now has 150 staff, 85 vehicles, and six different depots, and she’s won just about every accolade and award in the industry, it’s fair to say she got the hang of things. 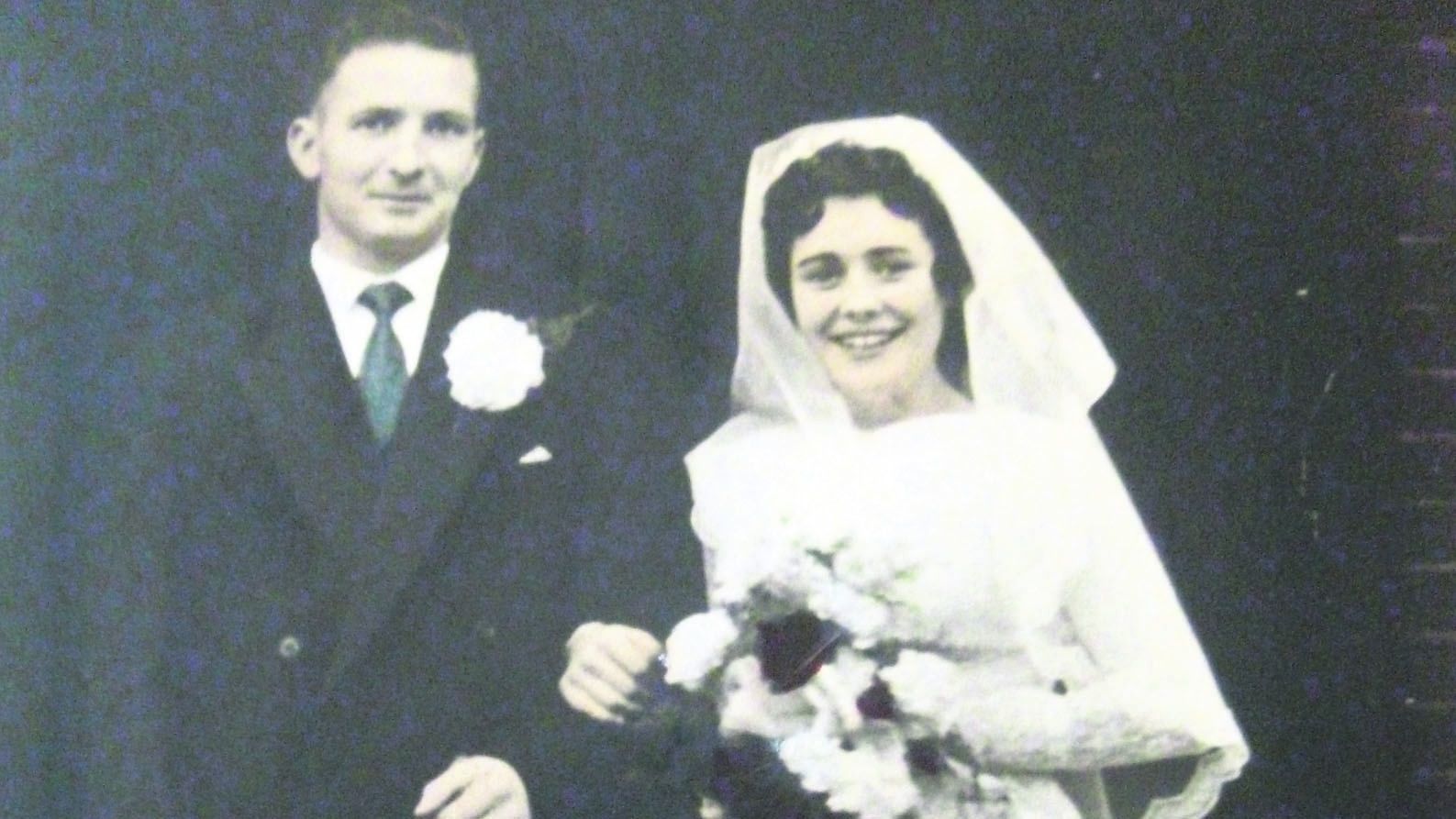 Jacqueline credits her Goleen-born parents, Joe and Kathleen (photo of them on their wedding day), with her determination.

She credits Joe, and her mum Kathleen (nee Sheehan), who lives with her in London, for her trademark determination and strength.

‘They were both born in Goleen, but dad moved to Drimoleague when he was five. They met in a dance hall in Skibbereen, mum minded the kids of people who owned a chemist there. Dad worked in Drinagh Co-op and then moved to the UK and he used to ring mum from a pay phone every Sunday before sending money to join him,’ said Jacqueline.

That was in the early 50’s and they lived in the north of England before coming to London where they had their four children, Jacqueline being the youngest.

‘Dad worked first for British Rail and started his own business in 1959 in demolition, and then went on to become one of the biggest players in London in waste,’ she said proudly.

Tragically he died of a heart attack in 1985: ‘I remember I was just 17 and had only just come back that day after spending the whole summer in West Cork. It was a massive shock to us all. Mum was just 48 at the time.’

At that stage the business was a ‘phenomenal size,’ but Jacqueline’s two older siblings made the decision to downsize, and within a two year period O’Donovan Waste comprised just a handful of people and the four siblings.

Jacqueline had planned on becoming a childminder. ‘The children were saved!’ she jokes.

Jacqueline is the only female in such a role London and, to her knowledge, is one of only three in the UK, but she’s never seen it as a negative.

‘It might have been a negative for the males – they have feared me, I haven’t feared them! I am regarded as a formidable MD, without a shadow of a doubt. I am one of the disrupters, the trailblazers, I do things totally different to how other people in our industry do things and that is because I’m a female and I look at things differently.

‘I know people can find my directness intimidating but I don’t choose to be that way, it’s just the way I am and it’s got me to where I am today.’

She credits her gut instinct with a lot of her success: ‘Being the youngest, being daddy’s girl, I used to go with dad everywhere, went out on jobs, went to work with him, listened to him. I had no business schooling, it was basically my gut.

‘But I’m lucky enough to be able to say I don’t regret anything I’ve done or any decision I’ve made within my personal or business life.’

She tells the story of how a few months after her dad died she was queueing in the bank to make a business transaction.

‘The manager tapped me on the shoulder and brought me in to a room and said they’d be closing the business account because he didn’t think any of us were old enough to run things,’ she laughs.

Needless to say she has changed banks!

She’s a mother-of-one – her 23-year-old son Joseph (named after her dad) is studying in Washington DC.

Her marriage ended when he was three-months-old as a result of her postnatal depression.

‘PND was something you didn’t discuss back then. It was a case of “look at all the women who had 15 or 17 children and they got on with it so you should too”.’

She was 32 at the time, and had been married for two years.

‘I had left a hustling bustling business and suddenly found myself sitting in a living room watching day time TV that was driving me insane. Nobody wanted to bother me as they wanted me to enjoy this time, but I just found it very isolating.

‘In business I look at all my options, weigh them up and make my decision.

‘But common sense doesn’t prevail when it comes to children always, a child needs feeding when it’s hungry, not when I’m hungry so I really struggled,’ she says.

She didn’t get help, as it wasn’t discussed and ‘back then it was shown as a weakness.’

Her mum has been a great support to her throughout.

‘She’s 86 and is fitter than me. She lives with me and helps run the house. She’s been a great support bringing up Joseph and is an incredible lady.’

Jacqueline also does a lot of work supporting the Irish community in London. She feels it’s her responsibility, to continue Joe’s legacy.

‘Dad was known as ‘generous Joe’ – he was probably a bit of a soft touch. He was very charitable, he helped a lot of Irish people who came off boats, employed them, trained them, looked after them.

‘When my mum and dad arrived it was a case of “no blacks, no dogs no Irish.” There was a level of discrimination, they were part of that,’ she says.

The family-of-six lived in a one-bedroom flat in Kilburn until she was five-years-old, and she remembers that.

‘I think it’s very important we don’t forget the sacrifices that my dad’s generation and the generation before him went through to build a better future for us.

‘I’m currently working on project with London Irish centre in collating those stories.’

Has she any time for hobbies?

‘Work is my hobby, it’s my life, my passion. And I thoroughly enjoy it. It’s given me phenomenal opportunities as well – I’ve been in the White House, Buckingham Palace, I’m a regular at the Irish Embassy, I’ve met the Pope, all through work.’

Her top business advice is to trust your gut instinct.

‘And for females it’s to step outside of your comfort zone and stop apologising. What are you apologising for? Stop saying sorry!’

She’s also a great believer in sharing knowledge and developing her staff, who she says are the company’s greatest assets.

Getting back to West Cork was always something they did as a family.

‘Every holiday we ever went on as kids was to Ireland. And because dad was such a phenomenal character it would take us a week to get from Wexford, where we’d get off the boat, to West Cork, we knew so many people and we had to stop in so many places!’

Jacqueline says her connection with Goleen is stronger than her siblings, and she tries to get there at least once a month.

‘I’ve a house in Spain that I never ask to go to. Give me West Cork any day of the week. My house is just outside the village, three fields away from mom’s home place. I land on Friday night or Saturday morning and go back on Sunday,’ she said.

Her 89-year-old uncle lives there and it gives her a chance to spend time with him.

‘The view out to the Fastnet is something special and I could honestly look at it all day long.

‘I do all my best thinking in West Cork. All the brain fog goes and the ideas start to flow.’  Swedish company, Sortera, has recently joined forces with O’Donovan Waste, for an undisclosed sum.

Jacqueline said: ‘The move was motivated because we know our health is our wealth. This gives us the freedom to enjoy everything that we’ve already done.’