The Inchydoney Inshore Lifeboat Association turns 50 this year and, despite its two main fundraising events falling foul of the pandemic, there is still plenty to celebrate about the invaluable service

IT’S a Wednesday morning at Inchydoney beach and as the sun sets on another busy tourist season, there is an air of calm following two weeks dominated by both Storm Ellen and Francis.

Tom Neville and his colleague Seán O’Leary are busy preparing Réalt na hInse III, an immediately recognisable vessel to anyone that has spent time on the Blue Flag beach just outside Clonakilty, for its morning run.

Tom, a local to the island, has been working with the Inchydoney Inshore Lifeboat since 2003.

His knowledge of the famously changeable conditions at Inchydoney is a vital part of the invaluable service the lifeboat has been providing to locals and tourists alike for 50 years.

‘When the tide goes out of this area it’s nothing but sand,’ Tom says of the area between Inchydoney and Dunmore.

‘People then walk across the water because it’s so low and set up like it’s a beach and before they know it, they’re caught out over there.

‘We’ve had two calls this year to assist people off the sandbanks because they’ve got marooned.’

Formed against the backdrop of a tragic drowning in 1968 when father-of-six John Crowley lost his life, the lifeboat provides back-up to the Cork County Council lifeguards who patrol the beach.

Operating seven days a week in July and August and on weekends in June and September, the Inchydoney Inshore Lifeboat was this season run by Tom and his son Grattan.

They work alongside relief boatman Seán, a Clonakilty native who has served two years in the Irish Navy. 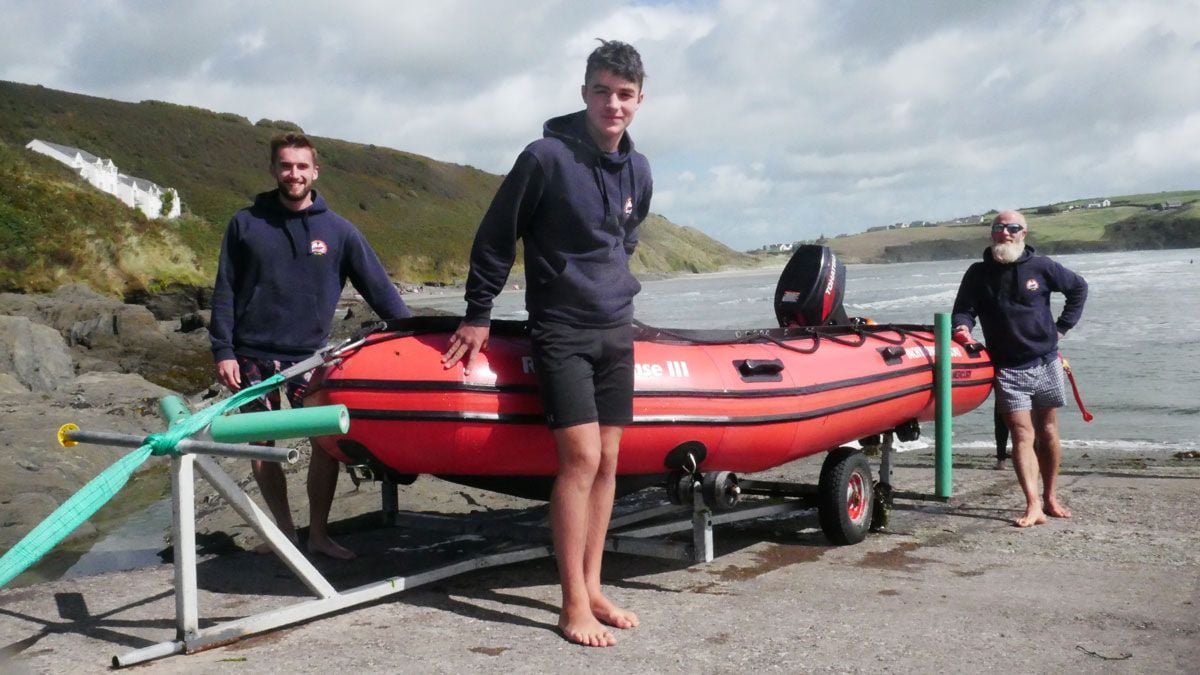 The Lifeboat crew: Seán O'Leary, Grattan Neville and Tom Neville. The crew is supported by a committee responsible for fundraising, maintenance and management of the service

The lifeboat crew is supported by a dedicated committee responsible for fundraising, maintenance and the general day-to-day management of the service.

‘Our main objectives are the promotion of water safety, the prevention of drownings and to make visiting the beach and engaging in watersports as safe as possible,’ vice-chair of the committee John O’Sullivan says.

The rolling waves synonymous with the beach are what make it such an attractive destination for watersports enthusiasts across the region.

On the morning The Southern Star visited there were over 40 surfers from the surf school on the west beach enjoying the last days of summer.

The growth in popularity of open water swimming is also evident at Inchydoney with new marker buoys being added last year to help keep swimmers on course.

‘Our role is very much about prevention,’ Seán says.

Rescues are inevitable but the ultimate aim of the lifeboat crew is to act rather than react.

‘It can be hard because different people have different levels of experience. Our patrols involve us warning people where it is safe to swim and making sure they avoid areas where they might get into difficulty.’

The unique area the lifeboat patrols is vast, stretching from Muckruss Bay all the way down to the mouth of Ring harbour.

‘There are parts of the beach not visible from the lifeguard station so we come up here to advise people and tell them about the depths and potential dangers,’ Tom says as we enter the channel area of the west beach.

Conditions are calm on the day of our interview with the crew, and so your intrepid reporter is welcomed aboard Réalt na hInse III for a scan of the coastline.

It says a lot about Tom that when we’re hit by an unexpected wave, his first instinct is to check on the health of my camera and recording device.

As luck would have it, we’re required to make a rescue while I’m on board. Well, a rescue of sorts.

The casualty is an orange street cone that’s been blown into Muckruss Bay during a recent storm.

Tom and Seán both assure me the cone will make a full recovery. 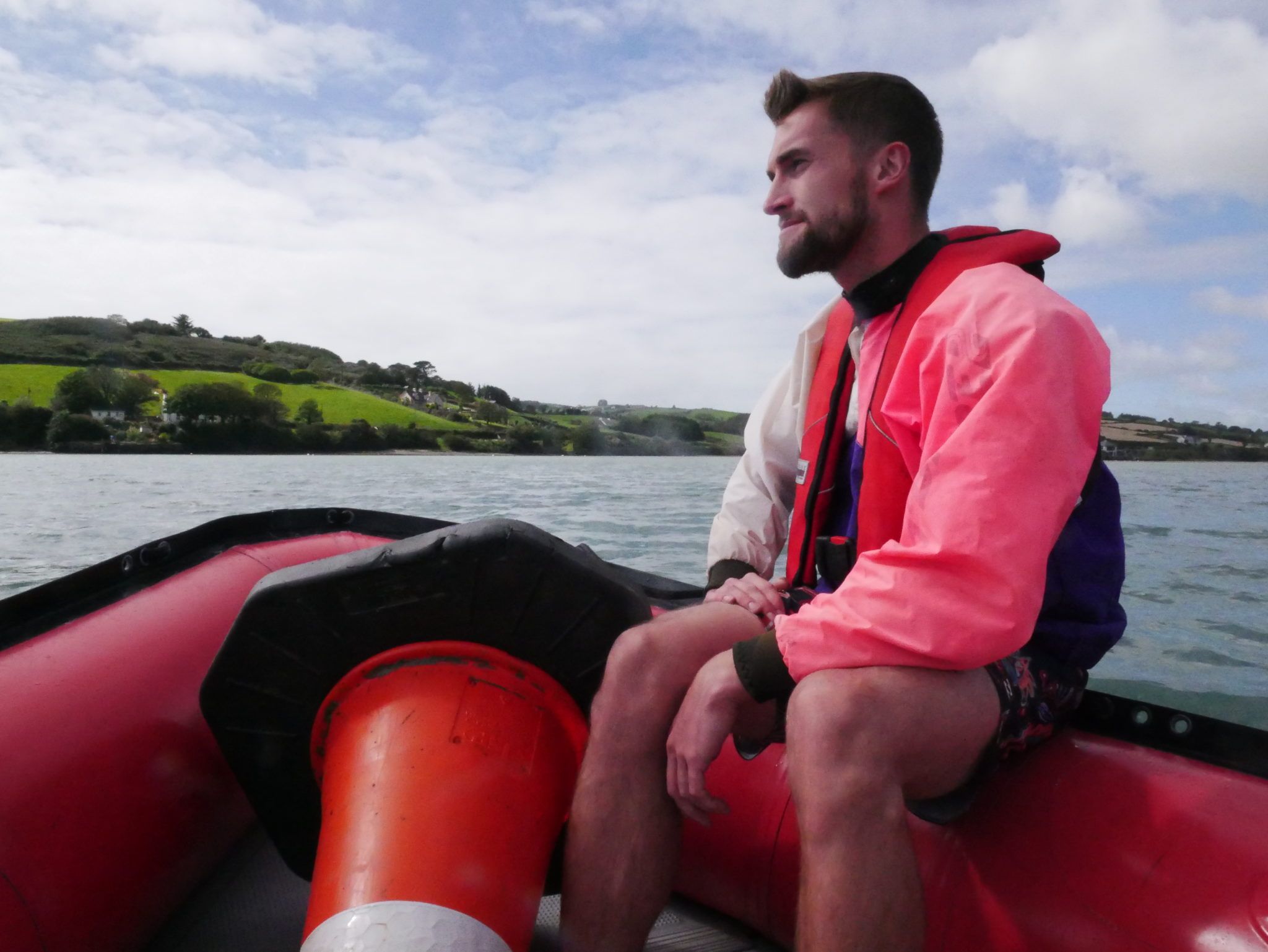 Seán O'Leary and the rescued cone

This good-natured craic is no doubt a requirement of any job in the emergency services, given the seriousness of what they’re usually dealing with.

As a child, Tom bore witness to a drowning at Inchydoney.

‘When you’re a child you don’t really understand grief and devastation. It’s only in later years you start working these things out yourself.'

It’s hard to imagine Inchydoney without its lifeboat but 2020 has been a year like no other. The charity's two main sources of income, church gate collections and an August bank holiday beach collection, both fell foul of the Covid-19 pandemic.

The announcement last Friday that the association is to receive €3,539 in Covid-19 stability funding will provide some reprieve, however.

‘We had already dipped into funds for 2021 just to keep the boat on the water so we were delighted when news filtered through about the grant.

‘It’s been a tough summer so it’s great to know that some of next year’s budget is already covered,’ John said.

The recent rescue of two surfers caught in a rip off the east beach highlights just how much this service would be missed should it ever cease.

• To donate to the Inchydoney Inshore Lifeboat, visit iDonate.ie