Declan Corcoran with his dad Seanie and the Austin Devon car in 1972.

TWO brothers from Ardragh in Crookstown have ended up buying their family’s old car – 50 years after their dad sold it.

Declan Corcoran had been scouring the site DoneDeal when he came across an ad for the 1952 Austin Devon and immediately recognised the Cork registration plates – ZK7242 – as the very car his late dad Seanie had bought in Bandon in 1972.

‘I was looking for vintage cars as I have eight of them at home and spotted the car in June as I knew it very well and even have pictures of me as a young lad next to it,’ said Declan.

‘The seller was from Armagh, but the ad was removed a few days later so I presumed it had been sold but it came back up on the site again in September. I rang him straight away and told him my story and my connection to the car and we bought it from him for €3,750.’

Declan and his twin sons, Jack and Declan Jr, who also have a love of vintage cars, travelled up North to meet the seller and seal the deal.

‘I just knew I had to get it and had heard before that it was still in the Cork area but hadn’t come across it anywhere. I found later that it left Cork in 1997.’

Declan and his brother Joe bought the 1.2l car between them and are delighted that it has come back home to Ardragh after getting it transported down from Armagh.

He said it drives reasonably well, considering it is 70 years old but you wouldn’t be caught speeding in it, he joked.

‘It’s fantastic to have this car back and my sons are thrilled with it. Our mum Margaret got a big surprise when it arrived home. I love a car that has a story attached to it.’

Declan even unearthed an ad that his dad placed in The Irish Examiner when he went on to sell the car. It even turned up at the Crookstown Vintage Rally in 1993, but he didn’t even spot it there, despite walking past it!

‘The funny thing was that my dad was selling it as a vintage car even back then, as it was 20 years old. I found out that it was originally owned by Peter Jeffers from 1969 to 1972 and it was then traded in to Kevin O’Leary’s, where my dad bought it.’ 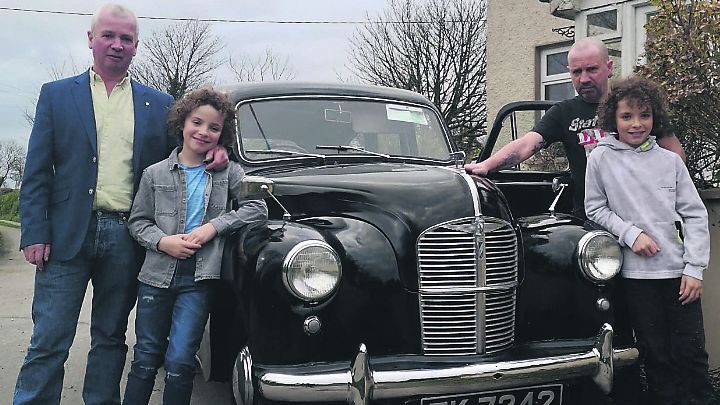 Declan Corcoran with his sons Jack and Declan Jr and his brother Joe with the Austin Devon car back home after 50 years.