New county mayor FF’s Gillian Coughlan talks about her start in politics, being wooed by other political parties and striving to find that work/life balance

WHEN FF Cllr Gillian Coughlan was made Cork county mayor she made sure she was surrounded by the people who had helped her reach such a milestone moment in her career.

‘If it wasn’t for this core group of people, especially when the kids were young, I wouldn’t be where I am today. I wouldn’t have been able to make my way in local politics, head out canvassing or attend meetings without all of them putting their shoulders to the wheel with me,’ said Gillian.

Her dad, Donal,  passed away in 2012, shortly after she was elected to the national executive of Fianna Fáil (FF), and he was also very much in her thoughts at the ceremony  in County Hall last Friday. ‘When I was elected to Bandon Town Council in 2009, he was very pleased but he also had some trepidation about it, but I know he’d have been very proud to see me as mayor,’ said Gillian. 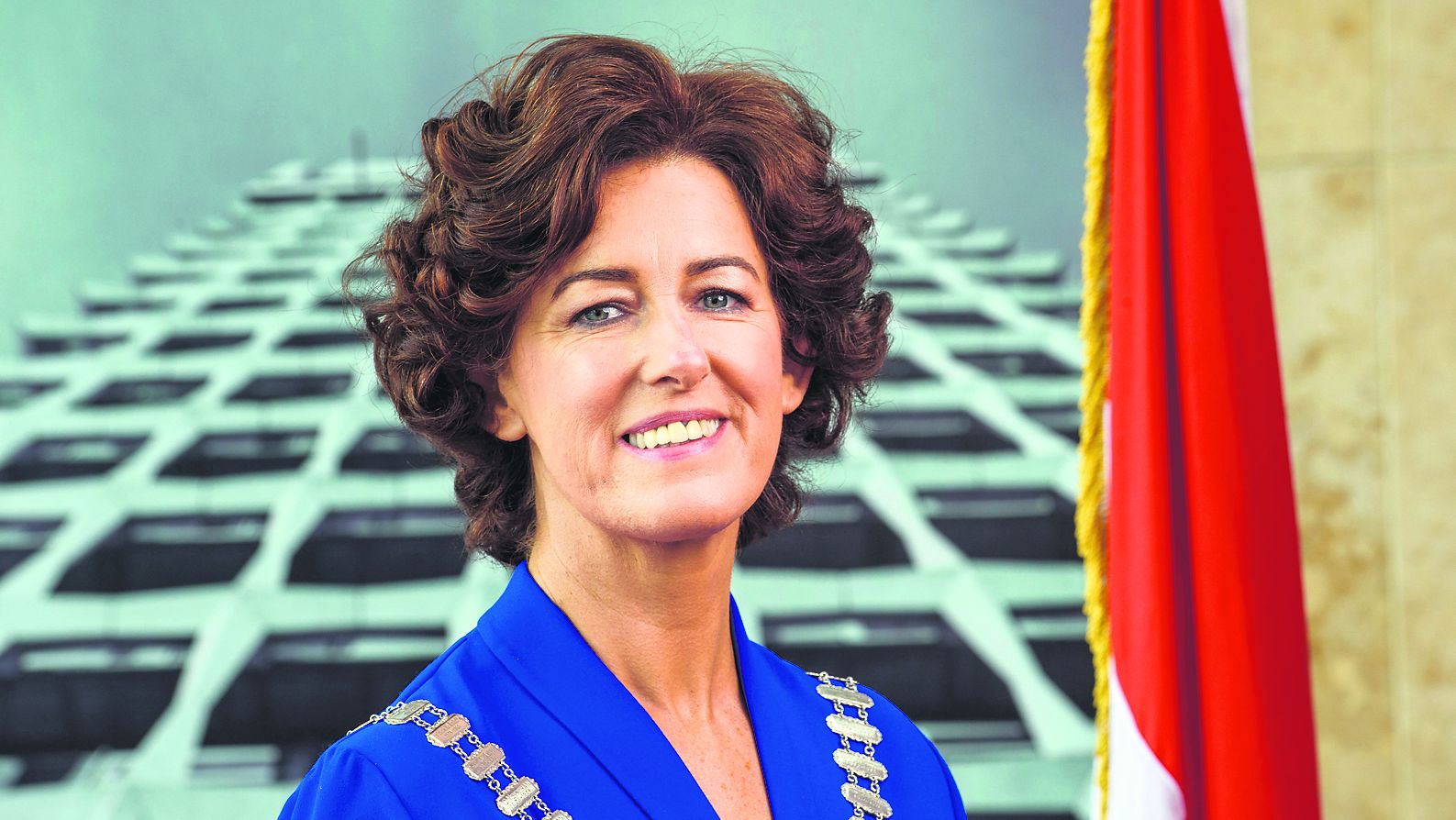 Gillian has been approached by all the major political
parties over the years, but has always been loyal to FF.

A Bandonian born and bred, she  grew up in Clashfree, just outside the town and is from a farming background. She had a strong interest in  public affairs, history and politics and studied history and political science in Trinity College, did her HDip in UCC and has taught history and CSPE in Coláiste na Phiarsaigh in Glanmire for the past 20 years.

This year also marks her 20th wedding anniversary to fellow Bandonian Don (who works in a Ringaskiddy pharmaceutical).

She’s taking a career break for the next 12 months to give the role the energy and commitment she says it deserves and paid tribute to the school management and colleagues, a good number of whom are also from West Cork, for their encouragement and support.

The 44-year-old doesn’t come from a political family and and when a neighbour invited her to stand for FF in the local elections in 2004, given her educational background, she went for it. She didn’t win that time round and admits she was disappointed.

‘At that stage, though, I didn’t really have a background in the party, so I worked at it. I got more involved in the community and in voluntary endeavours and in 2009 I ran again and was elected.’

That was the start of a political career that saw her elected as Bandon mayor in 2012, co-opted to a Council seat vacated by Margaret Murphy O’Mahony in 2016, and toping the poll in 2019 in the Bandon Kinsale Municipal District.

She was a key player in securing funding for the multi-million euro flood defence works in the town.

A slow starter, but a steady climber. It’s not all that surprising, so, to hear that she’s been approached by all the major parties at various stages in her career and as far back as Sinn Féin in 2005.

Considering she had sought a nomination to run for the County Council (before being co-opted), and to stand for election in Dáil Éireann, and didn’t get the nod from FF on either occasion, she must have been tempted to jump ship?

She admits that after town councils were disbanded, something she still laments, she thought her career might be over, and that it was a kick in the teeth not to get nominations after putting so much work into her campaigns.

Gillian is the fourth female county mayor and succeeds Cllr Mary Linehan Foley who she said represented Cork with great aplomb during a challenging year.

Does she feel women are still under-represented in politics?

‘It’s definitely getting better. And you have to ask yourself, what is politics? If you go to any community event anywhere, half of the organising committee are women, so women are very political in the real sense of the word, being involved and getting things done on the ground in the community.

‘But then you have to ask why they’re not taking those steps to get involved in the political system and to be honest a big reason is that it’s just not that attractive in terms of workload,’ she said.

‘It certainly is a difficult undertaking especially when you have a family. And because of biology, when become a mother, you are more tied to the home which is important for you and your baby.

‘But the system doesn’t recognise that, or at least is only just beginning to.’

Looking back on her own career, she admits that at times she faced huge conflict as a mother and a politician.

‘When you’re out trying to make your way, you have to show people you can represent them, display your talent and be out there. You will not catch any politician at home any evening between six and 10pm.’

She has always worked to find that balance between home, school, Council and community duties: ‘There are also certain times when school takes priority as students are depending on their teachers to guide them through exams.The pandemic period was extremely difficult for students, teachers and parents, particularly when trying to co-ordinate work remotely. It was a relief to get back to school physically during the spring.’

‘Regret is too strong a word. In any career there are choices you have to make and I did the best I could.

‘I had to work very hard and choices had to be made, but when push came to shove my family always came first. I think a mother always knows the right thing to do and my children accepted that. I know it wasn’t their choice to have a mother who was a councillor but they support me and are hopefully proud of me.’

Looking ahead to her year in office she feels honoured, grateful and very excited, and also very aware of the weight of expectation and responsibility that comes with the role.

‘I look forward to working in a spirit of collegiality and ambition for Cork county,’ she said. As mayor she’s got a number of issues she wants to get stuck into, including adult education, retraining and helping people improve their digital literacy to enable them re-enter the workforce.

‘A lot of people risk being left behind by the significant acceleration in digitisation, and at the same time a lot of people are very challenged by broadband in West Cork.

‘Better broadband would foster and encourage local employment and would mean people wouldn’t have to commute out of the area which isn’t sustainable for the environment or communities.’

Determined to represent the people of Cork county with professionalism and gusto for the year ahead, she is keen to engage with young people to ascertain how best to support them in the emergence from the pandemic.

‘Youth health, mental health, mobility and fostering a sense of their citizenship are priorities for me during this year.

‘I hope to engage with Comhairle na nÓg and other youth groups in this regard.

‘I’m 100% committed to this so that the people of Cork county can be proud of their mayor.’